The Ukraine War just got much, much bigger

Scores of people, including children, have been killed when rockets hit a railway station in the eastern Ukrainian city of Kramatorsk.

Both Ukraine and Russia have since blamed each other for the deadly attack.

The railway station was hit at about 10:30 local time (07:30 GMT) on Friday, Kramatorsk Mayor Oleksandr Honcharenk told the BBC. 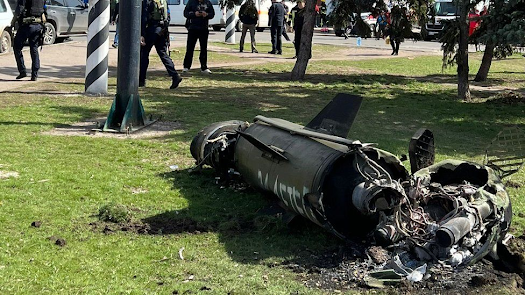 So far, 52 persons are confirmed killed and at least 100 injured. A western aid worker for World Central Kitchen was nearby, helping distribute food at the station at the time. He "counted between five and 10 explosions."

Ukraine's prosecutor general's office later said that nearly 4,000 people - mainly women and children - were at the station at the time.

With this attack, the latest in several like it - and coming on the heels of the Russian massacre of civilians in the formerly occupied town of Bucha in northern Ukraine - the war in Ukraine has transitioned to a new, much larger stage. Now going on for just under two months, neither the Russians nor the Ukrainians have yet attained their military objectives. That Ukraine has not expelled Russian forces from the country is hardly surprising, but Russia's vaunted land-power war machine is shown to be creaking with rusty obsolescence and incapability, plus poorly trained, poorly equipped, and poorly supported soldiers.

And then last Wednesday,

Russia has admitted suffering "significant losses of troops" in Ukraine, as the invasion enters its 44th day.

However, his admission that Russia has suffered significant casualties is striking. On 25 March, Russia's Ministry of Defence said 1,351 of its soldiers had been killed in combat. Ukraine puts the Russian deaths at almost 19,000.

Neither Russia nor Ukraine's estimates of Russian losses can be independently verified - and analysts have cautioned that Russia may be downplaying its casualty rate, while Ukraine could be inflating it to boost morale. Western leaders believe that between 7,000 and 15,000 Russian soldiers have been killed. 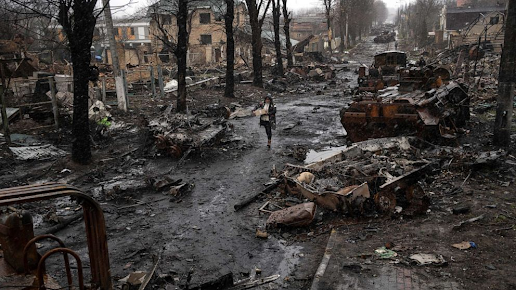 Rodrigo Abd/AP -- A woman walks amid destroyed Russian tanks in Bucha,
in the outskirts of Kyiv, Ukraine, April 3, 2022.

In terms of total losses -- counting troops, tanks, aircraft and missile inventory -- Russia has lost between 15-20% of the combat power it originally had arrayed against Ukraine since the beginning of the invasion, according to the official.

(During my military career, we defined a unit that lost that large a percentage of troops as neutralized, and 30 percent as destroyed, that is, combat ineffective.)

These massacres and casualty levels (on both sides) now mean that a negotiated peace is off the table. For Putin to make such an agreement would be seen by the senior military and civilian Russian leadership as an admission of Putin's personal failure. And Putin would have to realize that making such a peace would be professionally and possibly personally lethal for him. Russians know good and well that the Czar/General Secretary/President is never the one who fails the country, ever. If Putin accepted a negotiated peace, everyone else within the senior reaches of government and the military would know that the scapegoating purges would come quickly. And Putin knows that they would know that. Who would act decisively first - Putin and his inner, purge-immune circle, or the intended victims?

As for Zelensky, to negotiate a peace with invaders who have mass murdered his people on repeated occasions would also be an admission of failure. Unlike Russia, he would likely remain in office until the end of his term, and even if he was forced out, his exit would have the façade not of disgrace, but of an exhausted hero of world significance, to whom the nation owes its everlasting gratitude.

Until a point, that is, And that point is if the war simply drags on. Putin cannot relent. Ukraine now must win. Before now, all Ukraine had to do was not lose, but that is no longer good enough. Now it must eject Russia from the country, and not slowly. But Putin cannot allow his army to be so defeated. As Walter Russell Mead put it:

Now both sides are stuck with a war that neither knows how to win, and it is difficult to see the outlines of a compromise peace that both sides can accept. Ukraine cannot accept a peace that leaves it exposed to further Russian aggression and that involves further territorial sacrifice, and Mr. Putin cannot end the war without demonstrable gains at the expense of Ukraine. The logic of warfare now seems to lock the two sides into further, perhaps escalating military, economic and political conflict as each looks for some pathway to victory.

No one had any real hope for the negotiations occasionally held in Belarus, anyway. After the Bucha massacre, "Mykhailo Podolyak, one of Ukraine's peace negotiators and aide to President Volodymyr Zelenskyy, said the tone of peace talks had forever changed because of Bucha... ."

As for Russia, just yesterday,

The "peace" negotiations were never more than a kabuki dance to begin with, but with the Kramatorsk attack, the talks don't even rise to that level.

The Ukraine war has now transitioned into a proxy war between Russia and the Euro-American alliance. Ukraine is tragically caught in the middle. The very difficult and very uncertain task before Europe and the United States now is to manage the war to keep it inside Ukraine. (But remember the caution attributed to Bismarck that starting a war is like entering a dark room, blindfolded, to look for a black cat that is not even there.)

It is good in the wake of the Bucha atrocities that President Biden and Europe’s leaders are talking about holding Mr. Putin and his associates accountable for war crimes—once it is possible to collect evidence. Still, one doesn’t have to be Volodymyr Zelensky to notice that these good intentions have little to do with the reality that the current level of help from the North Atlantic Treaty Organization still leaves Ukraine in purgatory, with one foot in Mr. Putin’s hell and the other stretching toward deliverance by the West.
It is increasingly clear that after failing to secure a quick win, Mr. Putin’s Plan B is scorched earth.
Using crudely targeted long-range missiles, land mines and his army’s historic instinct to barbarity, he is simply destroying Ukraine—its people, its economy, whole cities and infrastructure. After the current “pause,” he’ll go back for more.
The consequences of this obviously unexpected scale of destruction are significant for the West’s calculations. At this point all the arguments, such as they are, for affirming a negotiated settlement that turns so much of Ukraine over to Mr. Putin have become impossible to credit.
In the absence of anything but passing press contact with the U.S. president, a question often put to those who interpret for Mr. Biden at the White House, Pentagon and State Department is whether we want Ukraine to win. After this week, I think the better question is: Are we willing to make Mr. Putin lose?
Saying that he’s experiencing a “strategic defeat” is a dodge. Every day—or year—that he is killing and wrecking, he’s winning. Vladimir Putin has to lose in Ukraine, not only in the eyes of the aghast outside world. NATO’s current military and political status quo—the arms flows and ratcheting sanctions—just isn’t enough.

Also, the April 8 sitrep from the Institute for the Study of War.
Finally, some observers, including some actually on the scene in Bucha, say that the civilians killed there should not be uncritically accepted as Russian victims. Whether you agree or not, it is not much arguable against the fact that both sides will lie outright if they think it helps them.
- April 08, 2022

An explanation of classified documents

During my military career as an Army artillery officer, I used and handled some of the highest-classified, most restricted-access documents ...