The Biden administration has proposed Covid-19 "vaccine passports," according to multiple news reports.

The Biden administration is working on creating a set of standards for people to prove they've been vaccinated against Covid-19, according to an administration official.

The official said they're currently working with a range of companies on the standards, including non-profits and tech companies, adding that they are likely still weeks away from being finalized, the official said.

Multiple government agencies are engaged in conversations and planning, coordinated by the White House, as this kind of system will play a role in multiple aspects of life, including potentially the workforce, another senior administration official told CNN. [Link]

Implementing vaccine passports would be a white supremacist measure. This does not require a long explanation, so let's get straight to the point: poor people are much less likely to be vaccinated than higher-income persons, such as in these states:

But racial demographics are not spread evenly across income deciles.

Any gap in vaccinating rich versus poor inevitably exacerbates racial divides. Black and Latino people are far more likely to live in poverty than white people, and despite having died at higher rates throughout the pandemic, they are receiving fewer vaccines than white people.

According to Black Lives Matter and other civil-rights groups, it does not matter that this gap in immunization is not intended. It does not matter that the men and women managing the vaccine program and distribution, or administering it to the public, do not discriminate at the vaccine sites by the race of persons who come for the shots.
Lack of deliberate intent does not excuse systemic racism. The fact that matters is this: "Black and Latino people are far more likely to live in poverty than white people, and despite having died at higher rates throughout the pandemic, they are receiving fewer vaccines than white people."
Furthermore, a Research Letter published in the Journal of the American Medical Association revealed that even among health-care workers,

... health workers in all ethnic groups were more likely to accept vaccination than were the same groups in the general population, but large disparities nevertheless persisted, the largest being between whites and blacks. Among the health workers, for example, about 35 percent of blacks said that they were not likely to accept the vaccine compared with about 10 percent of whites. The corresponding figures for the general population were about 60 percent and 24 percent, respectively. All other groups fell somewhere between blacks and whites.

"But such disparities exist mainly because blacks are simply deciding to refuse vaccination at higher rates than whites," is one response. "Everyone has the opportunity and so if more blacks than whites decline the shot, then it's their own fault."

Of course, such a response can come only from a position of privilege. It concretizes rather than addresses the white supremacism of vaccination processes and passports. The passports will obviously be issued only to persons who have completed the vaccination shots. And that means that a vaccine-passport system will be just as racially unjust as vaccine administration.
Passports will inevitably privilege white people over people of color. Whites will be advantaged for travel, for attendance at sporting events or even government functions open only to passport holders. And as CNN's report above indicates, whites will be massively over-privileged also for employment and job assignments. Jim Crow could not have thought of a better way to widen the income and social inequality gaps between whites and POCs. 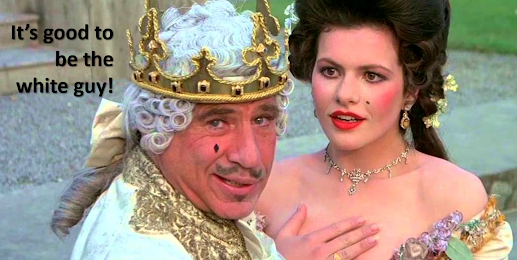 But at least there are no more mean tweets, so all is well.
Update: A reader has pointed out another white supremacist aspect of this plan, namely that the vaccine passport's main means of distribution will be electronic. And that will require passport holders to have a smart phone, an app, full internet service and online accounts. Guess which economic and racial demographic is less likely to have those things? Although to be fair, the digital divide between whites and blacks is small for smart phones. See here.
It is also worth remembering that in the former slave states, manumitted blacks were required to carry with them at all times their certificate of manumission. If they didn't and so failed to produce them on demand, they could be (and were) returned immediately to slavery. So there is a certain history of "show me your papers" for black people that whites do not have. A lot of criticism by whites of the vaccine passport has been to compare it to Nazi Germany or the Soviet Union. Fair enough. But for black Americans, a more apt comparison would be to compare it to the Confederate Home Guard, described by some historians as the Gestapo of the Confederacy.
Update: Are we seeing a pattern emerge from this administration?

[A]ccording to a Thursday report in the Washington Post, the White House is being warned that too much focus on “physical” infrastructure could lose the bill support among minorities, because such a focus would represent “nostalgia” for an era where “working class whites” benefitted from government welfare, and could be considered both “racist” and “sexist.”
“Some people close to the White House said they feel that the emphasis on major physical infrastructure investments reflects a dated nostalgia for a kind of White working-class male worker,” the Post noted Thursday.

Racist and sexist in the same bill. Quite an accomplishment.
Update: The Appeal of the New Totalitarians
- March 31, 2021