The Priesthood of Politicism Offers Only Damnation 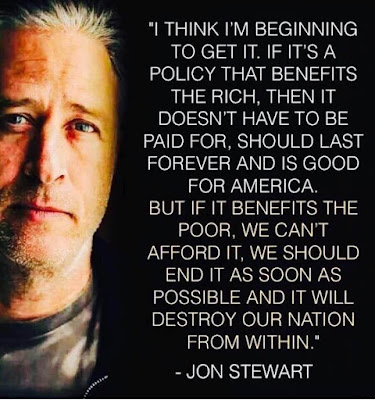 A progressive friend of mine posted this on his FB page. I was tempted at first to respond that the singular exception of either party that comes to mind is Donald Trump, in whose administration the incomes of minorities and the lower half of income earners rose faster and by a larger proportion than of whites and the upper earners. And that under Trump's policies, minority unemployment reached the lowest ever recorded.

But I didn't so reply. Instead, it struck me that Stewart was basically correct, and that naming Trump as the exception simply buttressed Stewart's point. In fact, I agree with Stewart, but not fully because Stewart does not go near far enough. He pulls up way short of the issue.

Following are three links, all dating well before Trump was even on the political scene at all, which should give a clue that the corruption of the federal government by far predates Jan. 20, 2016.

The first is on billmoyers.com. Bill Moyers, now 86, is a lifelong Democrat who served as LBJ's press secretary for two years. His liberal-progressive creds are solidly established. And on his site is this article: "Anatomy of the Deep State," by Mike Lofgren.

Yes, there is another government concealed behind the one that is visible at either end of Pennsylvania Avenue, a hybrid entity of public and private institutions ruling the country. ... the state within a state is hiding mostly in plain sight, and its operators mainly act in the light of day. Nor can this other government be accurately termed an “establishment.” All complex societies have an establishment, a social network committed to its own enrichment and perpetuation. In terms of its scope, financial resources and sheer global reach, the American hybrid state, the Deep State, is in a class by itself.

And as Lofgren explains, not only is it in a class by itself, it is in a class for itself and no one else.
Second is a paper of a research project by Cambridge University, which, being in England, can hardly be accused of having a dog in the fight. Cambridge says its empirical research of American politics shows that

Well, duh.
Third is, "America’s Ruling Class And the Perils of Revolution," by Angelo Codevilla. He is Prof. Emeritus of international relations at the Pardee School of Global Studies at Boston University. He also served as a foreign service officer and professional staff member of the Select Committee on Intelligence of the United States Senate.

Today’s ruling class, from Boston to San Diego, was formed by an educational system that exposed them to the same ideas and gave them remarkably uniform guidance, as well as tastes and habits. These amount to a social canon of judgments about good and evil, complete with secular sacred history, sins (against minorities and the environment), and saints. Using the right words and avoiding the wrong ones when referring to such matters — speaking the “in” language — serves as a badge of identity. Regardless of what business or profession they are in, their road up included government channels and government money because, as government has grown, its boundary with the rest of American life has become indistinct. Many began their careers in government and leveraged their way into the private sector. Some, e.g., Secretary of the Treasury Timothy Geithner, never held a non-government job. Hence whether formally in government, out of it, or halfway, America’s ruling class speaks the language and has the tastes, habits, and tools of bureaucrats. It rules uneasily over the majority of Americans not oriented to government.

As I said, all of these articles were published before Donald Trump was part of the country's political scene. Despite all the fury about Trump's presidential tweets and often off-putting personality, the real reason Washington pushed back against him was because "he is not one of us." It is true that under Trump the rich got richer, which ordinarily would be greeted joyously by Democrats and Republicans alike (but especially Democrats, who are now the party of and for the upper class). But that was far overwhelmed by the fact that the non-rich got richer also, and by higher margins than the wealthy. So the Trump years essentially were a time of wealth transfer from the wealthy Political Class to the non-Political Class, and that was simply intolerable.
As Ben Weingarten explained last year, Trump exposed the rot and corruption of our ruling class.

[O]ne of President Donald Trump’s myriad achievements stands above all others: he has exposed the unprecedented degree of rot and corruption that pervades the American system.
More specifically, Trump has exposed the ruling class: the bipartisan political establishment and its adjuncts in Big Tech, the corporate media, Big Business and Woke Capital, the academy, and across the commanding heights of American society.
Trump’s manners engender hatred in the ruling class. Even more significantly, his tenacity in confronting the ruling class’s members with their failures—and the fact he has threatened to rectify those failures—discredits and disempowers those responsible for them. Their response—a perpetual effort to destroy him—has shown the ruling class to be lawless and tyrannical.

But Trump's truly unforgiveable sin for which no redemption was possible was this: he accurately identified China as the chief threat to America's political security, and took steps to oppose it. The literally uncounted and uncountable tens to hundreds of million dollars the Chinese Communist Party has poured into Political Class pockets has become its addiction, and no one is ever going to be allowed to turn it off or even reduce it.
Two months before 2016's election, it was clear to Prof. Codevilla that America's status quo "has resulted in citizens morphing into either this class’s stakeholders or its subjects."

From the primary season’s outset, the Democratic Party’s candidates promised even more radical “transformations.” When, rarely, they have been asked what gives them the right to do such things they have acted as if the only answer were Nancy Pelosi’s reply to whether the Constitution allows the government to force us into Obamacare: “Are you kidding? Are you kidding?”
On the Republican side, 17 hopefuls promised much, without dealing with the primordial fact that, in today’s America, those in power basically do what they please. Executive orders, phone calls, and the right judge mean a lot more than laws. They even trump state referenda. Over the past half-century, presidents have ruled not by enforcing laws but increasingly through agencies that write their own rules, interpret them, and punish unaccountably—the administrative state.

In 2004, Glen Wishard wrote "A Thumbnail History of the Twentieth Century," boldface original:

The common theme is politics as a theology of salvation, with a heroic transformation of the human condition (nothing less) promised to those who will agitate for it. Political activity becomes the highest human vocation. The various socialisms are only the most prominent manifestation of this delusion, which our future historian calls "politicism". In all its forms, it defines human beings as exclusively political animals, based on characteristics which are largely or entirely beyond human control: ethnicity, nationality, gender, and social class. It claims universal relevance, and so divides the entire human race into heroes and enemies. To be on the correct side of this equation is considered full moral justification in and of itself, while no courtesy or concession can be afforded to those on the other.

Therefore, politicism has no conscience whatsoever, no charity, and no mercy.

I have said before that politics is the religion of America today, frankly much more on the Left than the Right, but not absent from the Right at all.

Orwell was correct that politics very easily can can become nothing but gaining and keeping power. When that happened within one party - note past tense - in America, no one should be surprised that eventually the other party followed suit.

That is where we are: politics in America is the literally religious-type quest for power - and for nothing else at all. We are way past (I say years past) the times when effective, enduring compromise was possible. It is not.

I do not see any way to reverse this. I am reminded of a disease I read of some time ago, that once it becomes symptomatic, it is too late to treat it. I think that politically that is where we are now. It seems clear to me that we no longer live in the "United" States of America, and I see no way to regain that.

The question is whether the United States will survive in its present form, or will some kind of dissolution come to pass. Personally, I am not optimistic.
See also:
Social Democracy is Collapsing Before our Eyes - American civic life is fracturing, and everyone knows it.
Victor Davis Hanson: The 10 radical new rules that are changing America
- March 22, 2021 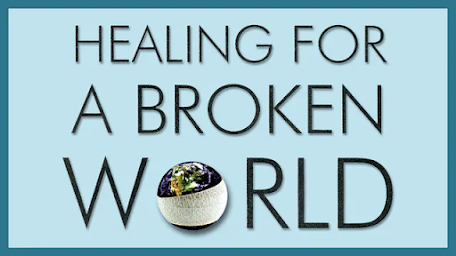